Merger in the making

Hamburg, January 10th, 2019 – The oil and gas production company DEA Deutsche Erdoel AG turned 120 years today. DEA is one of the most long-standing E&P companies in the world and was one of the first players at the dawn of the commercial oil production era. In Germany, DEA has provided important economic stimulus and made a significant contribution to the domestic energy supply. 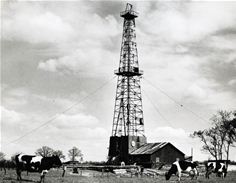 The Deutsche Tiefbohr-Actiengesellschaft was first registered in Berlin on 10 January 1899. This started a remarkable company history. Since its inception, DEA had been active in more than 30 countries around the globe.

Over the past twelve decades, a small national drilling company evolved into an international mineral oil and chemical company. After divestments in 2001 and 2002, DEA focussed exclusively on exploration and production of hydrocarbons. The sale of RWE Dea to LetterOne took place in 2015. At this point, the existing portfolio started to significantly expand, with takeovers and licence acquisitions in Norway and Mexico. Now in 2019, during the year of our 120th Anniversary, DEA is in the process of merging with its competitor Wintershall, also a successful German oil and gas company.

CEO Maria Moraeus Hanssen who joined DEA in January 2018, pointed out that she is the 13th CEO of the company: “I am proud to open a new chapter in the history of this German upstream company. DEA has come a long way in addressing the challenges of a modern oil and gas company, using our competence and resources to help secure a reliable energy supply, while continuously work on minimizing the carbon footprint from upstream exploration and production. DEA’s workforce can be proud to be part of the remarkable story of the oil and gas industry.”

The Chairman of the Supervisory Board, Lord (John) Browne of Madingley, commented the anniversary with the following words: “DEA is one of a small number of companies around the world that can trace its routes back more than a century. Today, DEA is a very different company. It has a high quality and focused portfolio, with world-class positions in a number of important hydrocarbon-producing countries such as Mexico and Norway. This provides a strong foundation for a new chapter of growth and development. As we prepare to come together with Wintershall to form Europe’s largest independent E&P company, I thank everybody at DEA for their continued commitment and hard work.”

Background information on the company history and link to the birthday movie: http://ots.de/c2zV9m